When you talk to Katie and Eric from Mountain Modern Life, you immediately want to be friends with them. It’s no wonder their business — founded on their love of creativity and curiosity — has taken off organically. Their idealistic point of view and notions about learning and creating are infectious — so infectious, in fact, that even if you don’t have a single handy bone in your body, you leave the conversation thinking, “I might be able to figure out upcycling too.”

The couple met back in 2007 while in college in Ventura, California, and since then, they’ve been doing what so many young people do after college graduation — searching.

The Journey Begins
After Eric graduated from film school, they spent a couple of years in Los Angeles, where Eric was working in TV and film, but he and Katie missed being near their families. So, they decided to leave the West Coast, moving closer to family in Georgia and the Falcons. Eric got a solid job there in healthcare, and while it was a steady, stable career, as he moved up the ranks, a promotion landed him in a position that had him traveling up to six days a week.

Around the same time in 2013, Katie was working for a real estate company when she was diagnosed with a nerve disorder — Complex Regional Pain Syndrome (CRPS) — which was a big shock and initiated a mental reset for her. She desperately missed using her creativity and decided to make a change in her life and refocus on what she was passionate about. She actually studied graphic design in college and always had an eye for web design, and it felt like the right time to bring those tools back out of the toolbox.

Starting Her American Dream
She started a small online business called Upcycled Treasures (which would become Mountain Modern Life), refurbishing furniture and blogging about it, and over time, it started to really take off. Working from home, she had a flexible schedule. They’d always talked about owning an RV once they retired, but suddenly, they couldn’t remember why they’d want to wait that long.

With Eric’s travel job ramping up, he and Katie soon realized they were never going to spend any quality time together as a married couple if things stayed the same. His job was dictating their relationship.

Eric in front of their Tiffin motorhome woodworking.

So, Eric quit his high-travel job, and the couple dove headfirst into Katie’s small business venture together. But they wanted to add a twist to the story — their plan was to start upcycling from an RV and document their adventures. Upcycling is the process of transforming discarded, underloved items into something fresh, new, and usable. They weren’t sold on the area they’d been living in in Georgia and were dying to explore more mountainous terrain and possibly find the perfect place to settle down and start a family. And so, the search for the right RV began.

Learning How to Pick the Right RV
Katie and Eric didn’t know a thing about motorhomes. All they knew is they wanted the freedom it would bring. So when their search began, it was overwhelming. The first thing Katie did was to join all the manufacturers’ online forums. The Tiffin community stood out immediately. People were willing to give their personal recommendations of the brand over and over again. After whittling the search down to a few brands, they found a used Open Road Allegro 32 LA, and when they walked inside, they knew it was theirs.

Eric and Katie with their 2008 Tiffin Open Road Allegro.

The way the windows were designed to let light in from every direction felt unique; the bathroom was totally separated from the living room and bedroom, and the storage was unlike anything else they’d seen. The couple also had a close eye on other small touches about the coach; for instance, Eric noted that the windshield was one solid piece of glass, and Katie noticed immediately that the cabinets were real wood — easy to refurbish and personalize. Even the closet door was made of thick hardwood. They had found their RV, and now their adventure together could really begin.

Nomadic-Standard-Time
The couple set off traveling the U.S. on a nomadic American dream, visiting family in Wisconsin until the weather got too cold, and then moving on to see more family in sunny Florida for several months, and stopping in to experience brand new terrain along the way. All the while, they were perfecting their craft of upcycling, woodworking, and running a small business all from their 2008 Tiffin Open Road Allegro.

Eric in Ouray, Colorado, with their rescue dog, McNally.

Their favorite destination since their journey began three years ago has been Ouray, Colorado — also known as “Little Switzerland.” It’s an incredibly unique place, known to be the recreational capital of Colorado. Ouray is located on U.S. Highway 550 along the San Juan Skyway Scenic and Historic Byway, one of America’s most beautiful drives. Without their RV, they would never have traveled there and taken their time exploring the town, living like the locals.

Searching for the Right Mountains
Everywhere they go, Katie and Eric tote along their two cats and rescue dog, McNally, who love exploring the new terrain with their pet-parents. You see, since the very beginning, Katie and Eric’s number one goal on this winding, exciting RV adventure has been to find the perfect place to settle down and start a family. And they desperately love the mountains.

It’s why Ouray, Colorado, was so special. But Colorado is far away from their families. So, the search continues. With each stop, they take their time — at least a month at a time — picturing what it might be like to live there.

Eric hiking in Ouray, Colorado, with their rescue dog, McNally.

During their travels, they’ve realized, even when they were firmly planted somewhere, they didn’t take advantage of all that those towns had to offer — they didn’t explore as tourists would. Whenever they land, they don’t plan to make that mistake again.

Today, Katie and Eric have gotten even more serious about their search for the right mountain town where they can settle down and start a family. Admittedly, they are craving a home base. But now that the RV travel bug has bitten them, there’s no plan to ever let go of that piece of their lives. When they find their home base, if they decide to build a home from the ground up — which is very much their style — they’ll be parked outside in their home on wheels, documenting the entire thing, sharing it on their Mountain Modern Life blog. 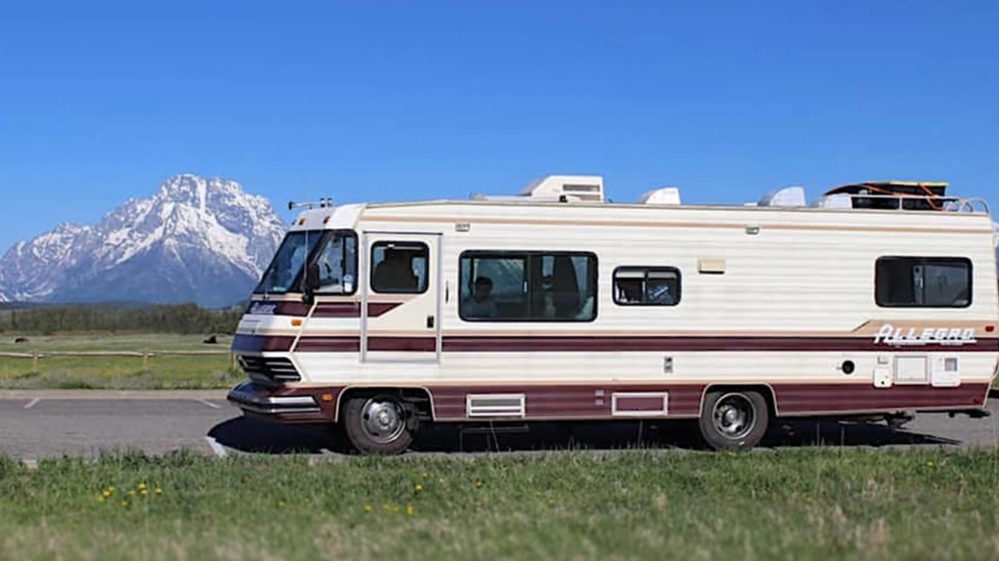 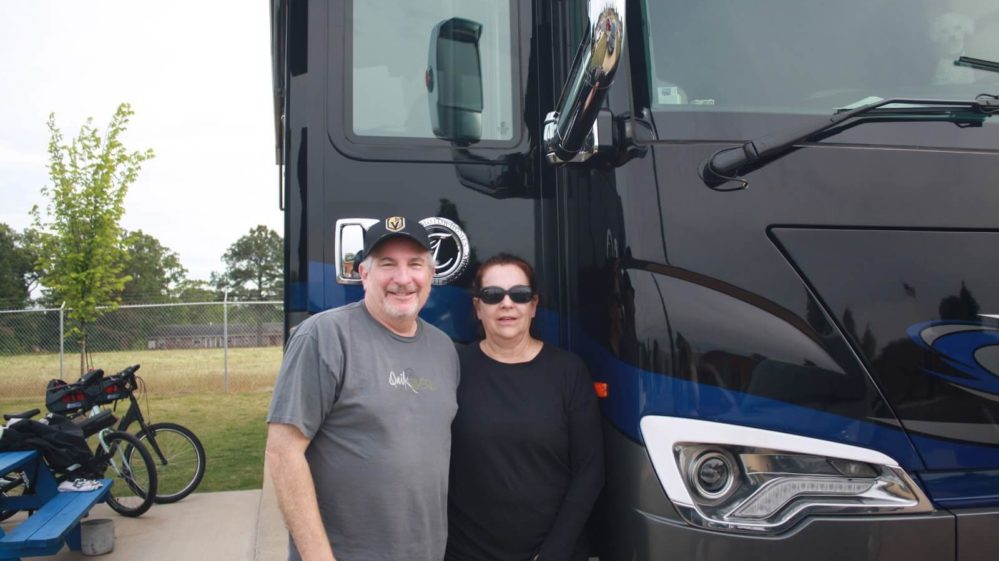 After owning several faulty RVs, a Las Vegas couple decide to purchase a Tiffin Motorhome to become full-time RVers and explore the country. 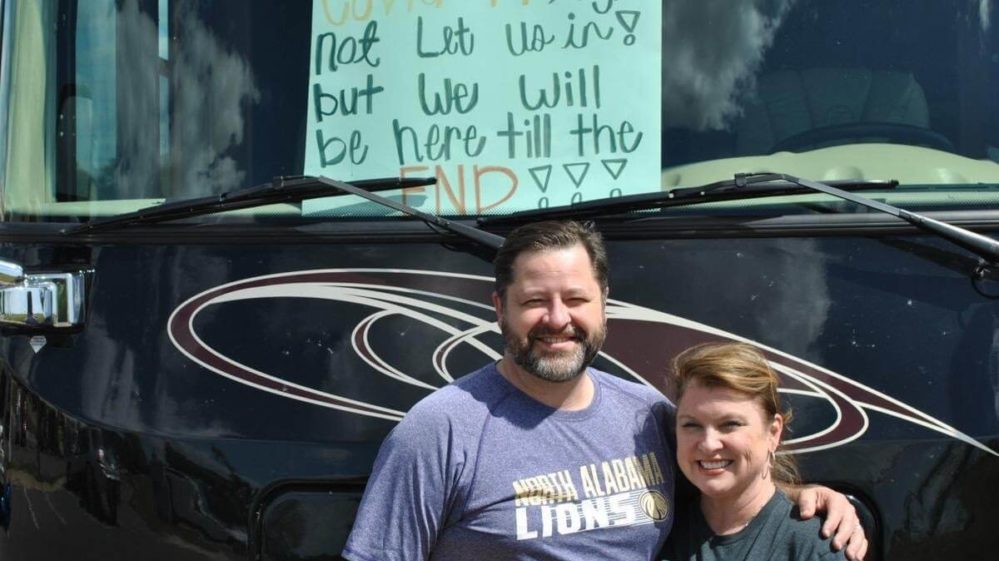 Parked In A Tiffin Waiting for A Grandchild to Be Born

COVID-19 forced these grandparents to wait outside a hospital in a Tiffin RV to be close to their daughter during her first birth.